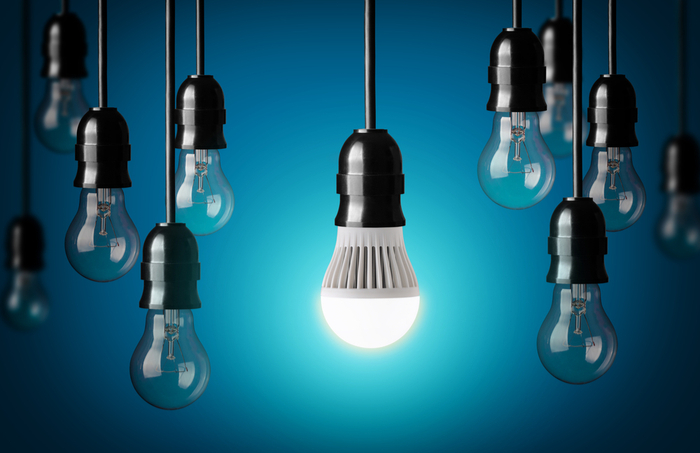 When purchasing light bulbs, you might not think much about the technology that’s inside them. But with recent advances and price reductions in energy-efficient LED light bulbs, it might make you think twice. In fact, depending on the energy costs where you live, you might be able to save up to 20% on your annual power bill by doing some investing. Here are some tips when it comes to selecting the right bulbs for your home.

What Are LED Light Bulbs?

First, a little bit about what LEDs are. LED stands for light-emitting diode; electrical current passes through a microchip, which illuminates tiny lights resulting in visible light. Strips of these lights are placed in the light bulb, which screws on to any lamp or light socket like any other incandescent bulb. But very much unlike incandescent bulbs, they’re so efficient because almost no heat is emitted. This means very little wasted energy, and a much lower voltage required to create an equal amount of light. LEDs can also come in different colors, from warm hues to cool outdoor lights.

As of 2012, common lightbulbs now typically use about 25%-80% less energy than traditional incandescent bulbs, according to the US Department of Energy. These can include halogen incandescents, CFLs, and LEDs. But Energy-Star LEDs come with a difference built in. On top of the standards already set, LEDs use 25%-30% less energy than halogens and last up to 25 times longer. While it may seem like an expensive investment in the beginning for a $7 to $10 dollar bulb, that bulb is going to last up to 40,000 hours. That’s four-and-a-half years if it’s on at all times – it will last for more than a decade if used only six to eight hours a day. To put a price on it, if you light a room for 30 minutes a day for two years, it will only cost you $0.50. If you use an LED bulb in your closet or bathroom, for example, you won’t be paying much at all in the long run.

Want to save money on your electrical bill right away? Then LED lights might just be your answer. When combined with turning lights off when not in use, the savings are practically guaranteed.

Share this page with your friends & neighbors! You can also print & email the page!